Town of Louisa, Rich in History

A number of early personalities of note furthered the significance of the village of Louisa Court House.

Patrick Henry, American Revolutionary icon and author of the “give me liberty or give me death” speech, was first elected to the Virginia House of Burgesses from Louisa in 1765.
Henry was a protégé of fellow Louisa Burgess, Thomas Johnson. Johnson, a man reportedly of enormous girth operated a tavern next to the Louisa Courthouse, and also became the High Sheriff of Louisa.

Captain Jack Jouett, known as the Paul Revere of the South, galloped through Louisa Courthouse in the early morning of June 4, 1781 to successfully warn Governor Thomas Jefferson that British dragoons were advancing toward Monticello with the intent of capturing the governor.

As Travel Routes were Established, Louisa Becomes a Crossroads, and a Civil War Target

In 1800, Louisa also became a stop on the new north/south Post Road running from Fredericksburg through Louisa Court House to Point of Fork on the upper James River. The Post Road’s completion coincided with establishment of the first Louisa Post Office in September 1800. Today Route 208 mostly follows the original Post Road and is known in several sections as Courthouse Road.
Construction on the Louisa Railroad began in 1836 and its successor the Virginia Central Railroad was completed through Louisa in 1840 permitting transportation of farming products to Eastern cities for sale and for export.

As important routes of supply, the Louisa Court House’s railroad lines were on-going targets for Union Army raids during the Civil War. These attacks culminate in the major cavalry engagement just west of the town at Trevilian Station on June 11 and 12, 1864.

The Town of Louisa is Born and Flourishes

The incorporated Town of Louisa was created by Act of the General Assembly in 1873.

The first Louisa Town Council consisted of seven local Trustees appointed in the Act. The Council was empowered to pass by-laws and ordinances, to keep the streets, to make other necessary improvements, and to levy taxes not to exceed fifty cents on each hundred dollars.

At the beginning of the 20th Century, Louisa served as a summer vacation destination for residents of Richmond and the Tidewater area. Several large Louisa homes and the Louisa Hotel took in boarders whenever temperatures and the humidity rose on the Peninsula.

By the 1930’s, a Town water supply, electricity, and paved roads were offered to residents of the Town of Louisa.

* History and Tours provided by Louisa County Historical Society, thanks to Elaine Taylor 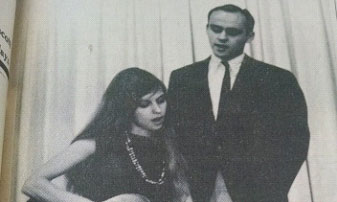 Were you living in Louisa County in March 1966?

Were you living in Louisa County in March 1966?