Were you living in Louisa County in March 1966?
History • History Featured • News 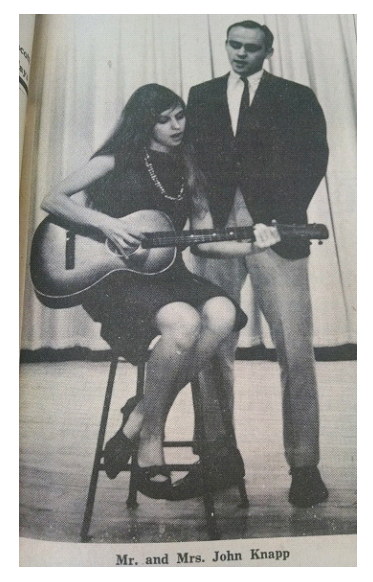 If you were, you likely were readying yourself for Greater Louisa Day on March 14. Greater Louisa Day was sponsored by the Louisa Chamber of Commerce to encourage residents to shop locally, and support Louisa merchants. Louisa stores and service providers offered customers one raffle ticket for every dollar spent on merchandise or a service. The Grand Prize of the raffle drawing at the end of the day was a new vacuum cleaner; second prize an electric mixer; and third prize a hair dryer. As part of Greater Louisa Day, the Home Beauty Shop of Louisa reduced their $10 permanents to $8.50. The Jefferson Shop in the Louisa Shopping Center marked their men’s dress shirts down to $1.50 and women’s blouses to $1.59. Over at Louisa Motors, the dealer offered to sell you a brand new 1966 Falcon Club Coupe for $1891, or invited you to take a look at their new inventory of Mustangs. “Want some wild fun on a tame budget, talk horse sense- the six-cylinder Mustang. It’s a 6 that thinks it’s an 8!”

Other goings-on in Louisa in March 1966;
⦁ The Louisa Board of Supervisors announced that it was establishing a special fox trapping season from March 15 to May 15. Created to prevent the spread of rabies in the county, a $3 bounty would be paid for every fox tail received.
⦁ The whole family was invited to participate in the annual Aunt Jemima Pancake Day sponsored by the Louisa Little League baseball team. It was held on March 26 at the Louisa Methodist Sunday School Annex. All you could eat for just $.89.
As part of an earlier look-back appearing in the CV in 1966, it reported that in March 1946, Lt. John Gilmer USMCR had arrived at the port of San Diego from duty in the Pacific Theater and that he expected to visit Louisa soon.
⦁ For the month of March 1966, Dick’s Drive-In of Louisa was showing “The Girls on the Beach” featuring the Crickets (without the late Buddy Holly) and the Beach Boys.
⦁ At the local Safeway, sliced bacon was selling for $.89 per pound and swordfish steaks for $.79 per pound. Over at the A&P, perch filets cost $.63 a pound.
⦁ In March 1966, the Louisa County High School hosted a “Hootenanny” in the gym with performances by local acts including local high school teacher John Knapp and his wife. Admission was $1 per person or $1.50 per couple.
⦁ In the March 31, 1966 edition, the CV printed in its entirety the Louisa County Public School Notice of School Desegregation Choice Plan under Title VI of the Civil Rights Act of 1964.


If these items trigger memories with you, the Central Virginian invites you to share them with us. Your thoughts and comments can be sent electronically to tcveditor@lcs.net or by mail to the CV at 89 Rescue Lane, Louisa, VA 23093. CV staff will review and share with our readers a sampling of your notes in succeeding editions.
In addition, the Louisa County Historical Society would like you to “Save this Date” April 30, 2016 for attending the annual Louisa Heritage Day held 10am to 4pm on the grounds of the Sargeant Museum, 214 Fredericksburg Avenue, Louisa. Craftsmen and artisans from across Central Virginia will be performing their trades with the tools and implements used in the early 19th Century. No admission charge and ample parking available. Have a family history question that you’d like the Historical Society to research? Bring it to Heritage Day and leave it with us. We’ll attempt to track down the details and respond back.